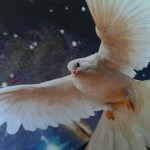 In corporate worship on Resurrection Sunday, 2015 I heard the Lord saying, “You have to carry the sound of the resurrection in your spirit in victory”.

I was pondering on the Word, experiencing it like water washing over me and it was permeating my whole being as a vibration, realizing that the “sound” was deposited into my spirit. It was energizing my whole being as a pulsating sound of victory, while being lifted up into a higher consciousness of His Love, life and glory.

The Scripture came to me, “I am the Resurrection and the Life” (John 11:25). The Resurrection is the Person of Jesus Christ, who lives on the inside of us.
In Eph. 1:17-20 Paul prays:
17 That the God of our Lord Jesus Christ, the Father of glory, may give unto you the spirit of wisdom and revelation in the knowledge of Him:
18 The eyes of your understanding being enlightened; that ye may know what is the hope of His calling, and what the riches of the glory of His inheritance in the saints,
19 And what is the exceeding greatness of His power to us-ward who believe, according tothe working of his mighty power,
20 Which he wrought in Christ, when he raised him from the dead, and set him at his own right hand in the heavenly places,
21 Far above all principality, and power, and might, and dominion, and every name that is named, not only in this world, but also in that which is to come:
King James Version (KJV)

The Resurrection power of the Spirit rises in us as a formidable force, overcoming every power of darkness. This Resurrection is the Christ Himself, living on the inside of us, causing us to be more than conquerors in every situation in the here and now. It regenerates us with His indescribable, energizing glory where we are co-seated with Christ in heavenly places in oneness. (Eph.2:6)

Whatever we carry in our thoughts and emotions emit sound, color and fragrance. When we carry the glory of the resurrection in our consciousness, it carries the sound of victory over every power of the enemy, which reverberates through us into the atmosphere, dispelling every sound of opposition to His glory as we proclaim His victory.

As we meditate on this, receiving the revelation of the sound of the resurrection power in our consciousness, no negative thing can ever influence us, intimidate us or discourage us. The light of Christ, “the Resurrection”, overcomes all darkness. The resurrection power is a mighty force of victory over death, hell and the grave! It carries the fragrance of His victory as He always leads us into triumph. And it is available every moment of your life, not only at a certain time of the year or in the age to come.

King James Bible
“Now thanks be unto God, which always causeth us to triumph in Christ, and maketh manifest the savour of his knowledge by us in every place.” 2 Cor.2:14

Remember, you can only release what you carry! So, get filled up with the power of the Spirit in the secret place and receive a “sound-shift”! Then every sound of discouragement, death, loss or fear will be overcome by the victorious sound of His resurrection – those dead in sin and also the physical dead shall be raised as we release that sound – if we believe!

God is fine-tuning our hearts in deep intimate love, permeating us with the sound of heaven, reviving us by the power of the Spirit, empowering us as a mighty army to take in the harvest with unheard-of miracles through that same Spirit that raised Jesus from the dead! Hallelujah!

I want to encourage you to lean into His resurrection power force, causing you to rise up as a mighty warrior, carrying the glory sound of the Lord’s victory into every situation, shifting the status quo by prophetic declarations and into every place you put your foot.
May the power of the resurrection restore everything around us that is dead, lost or broken as we release it by faith through our mouths in His authority, crying out, “Resurrect! Resurrect! Resurrect! in Jesus’ Name!” Hallelujah!