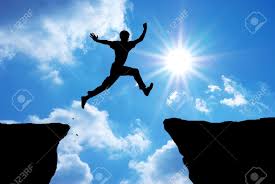 LEAPING ON THE SOUND OF PRAISE DECREES – ONTO HIGHER GROUND BY THE EMPOWERING OF THE SPIRIT.

As I was pondering 2017, I had the impression of people standing on a high mountain top (being able to see far into the distance), facing a deep ravine, separating them from an even higher mountain top. One by one the people started raising their voices like trumpets, releasing sound that reverberated over the surrounding mountain tops. Then some of them started leaping over the ravine, as if carried on the sound of praise, landing on on a higher elevation in an atmosphere of great victory. The number 17 signifies victory!
I sensed that the trumpeting sounds were faith decrees that were made according to the prophetic promises of God over their lives. The interesting part was that they were “praise-decrees” that had the power to catapult them over the seemingly insurpassable ravine onto even higher ground than before.

It is also significant that they were already standing on a high mountain top, signifying that they were people of worship, pursuing and enjoying God’s presence. For those there is the encouragement that even higher experiences in the glory await them – what the eye hasn’t seen, the ear hasn’t heard and nobody could even imagine!

FRAMING 2017 WITH THE WORD OF GOD
OVER YOUR LIFE!
I want to encourage each of you to take hold of God’s Word over your life as you cross over into 2017 with fresh vision and hope, declaring it boldly in full assurance of faith, expecting the manifestation of His promises in great victory and embracing the “New thing” that is springing forth even now as you frame your world with God’s Word.

“Through faith we understand that the worlds were framed by the word of God, so that things which are seen were not made of things which do appear.” Hebrews 11:3 KJV

Isaiah 55:11King James Version (KJV)
“So shall my word be that goeth forth out of my mouth: it shall not return unto me void, but it shall accomplish that which I please, and it shall prosper in the thing whereto I sent it.”
Blessing each of you with God’s goodness and grace for 2017!
Elsabe
www.elsabebriers.com