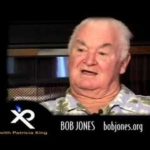 Bob Jones with Sandy Warner: “Did You Learn to Love?” –