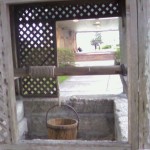 This is a very apt and “now” Word for the body of Christ received by my good friend, Kathy de la Hunt from Howick, South Africa.  We need to pay heed to this Word and do some adjustments where applicable.

The name Beersheba caught my attention, being a place of fulfillment of God’s promises over our lives.  As we follow the instructions at this well, building an altar of worship, calling on the name of the Lord, pitching our tent (so to speak) not willing to give up until all those promises have been fulfilled, fullness of overflow will come for anyone who is thirsty.

Enjoy and apply this Word.

Elsabe
“WELL DIGGERS”:  24th May 2013As I was spending time in the presence of God this morning I felt God say HE IS LOOKING FOR WELL DIGGERS

He said, ‘‘everyone is equipped to be a WELL DIGGER.’’
Well diggers are those who know how to go into the presence of God, till they reach the glory cloud and are able to draw water to drink, for our own healing, refreshment and re-firing.  They are then able to bring the living waters of resurrected life, the dunamis power of God Acts 1 v 8, from the glory of God to those who are thirsty.
‘‘But, very few are prepared to be WELL DIGGERS.Digging wells takes time and because of the cost, most people will not dig for themselves and rush to drink from the wells of others, but then, when that WELL DIGGER gets tired or moves on, there is no well to drink from because people have not learned to dig their own wells. That is why
REVIVAL has repeatedly died in the past.’’

He is looking for those who will pay the cost of being ‘well diggers’ for themselves and for others.
The Lord then led me to read Genesis and showed me that whenever a well has been dug there will always be those who cause strife at the well. Christians who won’t dig their own wells and out of striving, envious, jealous hearts, they fight over other peoples wells and try and close them down.
(At this point I was wondering- who in their right mind would want to close down a water supply in a desert land, when they themselves will suffer and be left stranded with no fresh
water? BUT THIS IS EXACTLY WHAT PEOPLE WITH NO WELLS of their own DO SPIRITUALLY.  When they find a WELL OF FRESH WATER, they throw rocks into the well with their gossip and slander trying to block the well, because they prefer to drink from the stale, stagnant waters of religion that they are used to drinking from, rather than the fresh living waters of resurrected life, that God is desiring to pour out into the lives of the ‘whosoever is thirsty’ as seen in Acts 5 v 17 – 18)

Then I felt God lead me to read the following:
Genesis 26 v 18 NIV
Isaac reopened the wells that had been dug in the time of his father Abraham, which the Philistines (H6429 -rolling /migratory people) had stopped up after Abraham died, and he gave them the same names his father had given them. ……..
I felt God say, He is calling His church to re-open the wells of resurrected life; the revival wells of super-natural power for healing and life changing salvations that were dug by our forefathers. The wells that have since been blocked by the migrant/ rolling Church, the ‘Christians’ who have never submitted themselves as sons to Spirit filled spiritual fathers, who could help them break through to a deeper walk with God. Instead, they have gathered with those who refuse to change and have moved around for years never putting down roots or drinking deep and have spent their lives rolling from place to place, not allowing anyone to confronted the things that have kept them in a lifeless religion. Whenever
they are faced with any form of discipline or direction that could lead to their own breakthrough, they immediately react by blocking up that well with criticism, judgement and slander against the very thing that is God’s life giving source for them, so stopping others from drinking there as well.
I felt God say, the way to re-dig and re-open these earlier wells was by coming in the opposite spirit. Giving recognition, speaking blessing and honouring those who have gone before and the work that they had done.
Matthew 10 v 41
“Whoever welcomes (receives, accepts) a prophet as a prophet will receive a prophet’s reward, and whoever welcomes a righteous person as a righteous
person will receive a righteous person’s reward.”

Then I went on to read:
Genesis 26 v 23 – 25 NIV
“From there he went up to Beersheba. (H884 – well of seven oaths /promises – seven the number of wholeness and fulfillment ). That night the LORD appeared to him and said, “I am the God of your father Abraham. Do not be afraid, for I am with you; I will bless you and will increase the number of your descendants for the sake of my servant Abraham.”

Isaac built an altar there and called on the name of the LORD. There he pitched his tent, and there his servants dug a well. Once Isaac came to the source of the fulfillment of promises and he heard God speak to him about his life and destiny he did four things:
1. He built an altar
2. He called on the name of the Lord
3. He pitched his tent
4. He dug a well
Then I felt God say that after re-digging the old wells, we were to dig new wells for the new season, the way Isaac did. Isaac now had the use of all the wells that had been dug, his fathers and his own.
WELL DIGGERS have to:
1. Build an ALTAR – have our own altar of WORSHIP
A sacrificial place where we constantly focus on and worship our God till we enter into the HOLY of HOLIES
Romans 12 v 1 – 2, John 4 v 25
Jeremiah 17 13bkjv – The Lord, the fountain of Living waters
2. Call on the name of the LORD – know how to pray in the Presence of God – using the POWER of the name of Jesus, before Our Father, Abba Father, ushering in His Kingdom on Earth as it is in Heaven – Matthew 6 v 6-14; 28 v 18 -20
3. He pitched HIS TENT- Be prepared to settle and give our all to the place where The SPIRIT of God leads us to receive our LIFE GIVING SOURCE of purpose and destiny. – Our Beersheba – Acts 5 v 12 – 18 be ADDED (functional part of the body) not a JOINER (spectator or observer ready to be a critic but never giving anything of themselves)
4. Dig a WELL- become a source of water for others.
John 4 v 14 Matthew 10 v 7 – 8

God is looking for WELL DIGGERS that are prepared to pay the cost. These WELL DIGGERS will be offering LIVING WATERS to the thirsty, lost world in the valley of decision making. This WATER will have the power of ALL THE WELLS that have gone before. From the first REVIVAL- OUT POURING of ACTS 2 through every revival the World has ever know, then bringing them to drink at the WELL OF THE FULFILLMENT OF PROMISES – BEERSHEBA – the latter rain.  This is the Well of the final outpouring, the awakening that will result in the greatest harvest of salvations the World has ever seen, then the ushering in of the KING of KINGS – JESUS our LORD. John 14 v 11 – 14
Believe me when I say that I am in the Father and the Father is in me;  or at least believe on the evidence of the works themselves.  I tell you the truth, whoever believes in me will do the works I have been doing, and THEY WILL DO EVEN GREATER THINGS THAN THESE, because I am going to the Father.  And I will do whatever you ask in my name, so that the Father may be glorified in the Son.
YOU MAY ASK ME FOR ANYTHING IN MY NAME, AND I WILL DO IT.
Kathleen De La Hunt
The Oasis Church
Howick
3290
Kwa-Zulu Natal
033-3303456