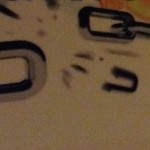 I started worshiping the Lord, went on my face before Him in the glory. Then I saw a thick chain and from behind it came a laser light with great speed, cutting the chain in two.  I saw the Lord’s face, His eyes burning with fiery passion.

Then I started singing “The chains are broken by His glory Light! ”  When Paul and Silas were in prison their chains were broken while they were singing praises to the Lord!

The Scriptures came flooding in:

Then Is.61:  He came to set the captives free

I knew this was a Vision to reaffirm the Word of Breakthrough I received yesterday.

As I was meditating on this, I was reminded of Saul whose mindset was instantly changed and he fell on his face before the One whom he persecuted.  In three days he was changed and became unrecognizable.  He even had a name change! Were the persecuted saints praying?  I’m sure they were!

Peter’s chains were broken off through the intervention of an angel, because the saints prayed.

I myself had an encounter with the Lord in the form of a vision that came to me in the form of a slide show when I was 39 years old. It impacted me with such power that I fell on my face, pleading for God’s mercy and the fear of God came upon me.  This brought me to a full surrender to the Lord and turned me 180 degrees around by His glorious grace intervention. I was delivered of my self power and became totally dependent on the Holy Spirit. I believe this divine encounter took place because my father prayed for me.

Jesus is the same yesterday, today and forever!  He will do it again!

Many have written to me for prayer from different parts of the world.  Some have children bound by drugs, others by wrong relationships, others by different kinds of rebellion and so forth.  Others are oppressed by abusive spouses, etc.  Others are bound by the spirit of poverty and are in bondage by the fear of lack, etc.

I know that this vision is linked to the Word I received yesterday and I want to inspire everyone to start making decrees with these Scriptures for those whom you have a prayer burden for.

When we receive this Word from the Lord by faith, we can already see these bondages broken in the spirit realm, declaring deliverance and healing by His glory light.

2 But unto you who revere and worshipfully fear My name shall the Sun of Righteousness arise with healing in His wings and His beams, and you shall go forth and gambol like calves [released] from the stall and leap for joy.

Nothing is impossible for those who believe! (Mark 9:23).

So here we go:

Father, we stand in one accord before You, believing Your “now” Word and revelation.  We know that we receive while we pray and declare Your Word over the ones who are bound because of wounding in their souls.  And we praise You that we will have glorious testimonies of the power of Your might!

You can sing with me:

The Chains are broken by His glory light

The chains are broken

The chains are broken

The Chains are broken by His glory Light

All glory to the Lord!

NOW SEE the chains broken and rejoice in it!